Shorelines are areas of constantly changing energy forces. Powerful waves, high water, and even ice move soil and rocks away from shorelines. What starts very small will remove trees and embankments if not corrected. Wave action followed by erosion of the shoreline is destroying structures built close to the shoreline. 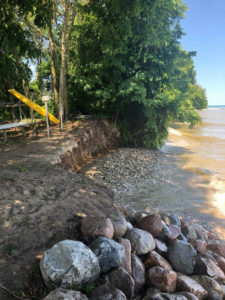 The sand, soil, rocks, and even cliffs get eroded as water and wind wears away the shoreline. Remember, erosion created the Grand Canyon. On your shoreline, it will not be as beautiful. The more sediment in the water, the greater the erosive effect. It’s an endless cycle.

The waves energy moves the grains of sand.  You see this every day on your beach. The sand begins to wash out smaller pebbles. The cycle continues the higher the water is and the stronger the waves are. Eventually a beach can wash away.

Wave energy removes soil even faster than the sand.  Soil is not as compacted as sand and weighs less per particle. Grass and tree roots are no match for waves.  One homeowner reported up to 15 feet of lawn disappearing in a single storm.

Even with lower water levels, the waves roll up the shoreline. The upper areas of the shoreline are not hard-packed, and the soil washes away even easier. 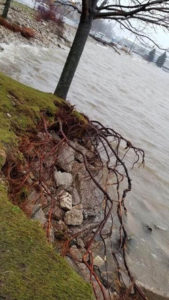 Trees and grass along the shoreline help stabilize the soil.  The energy of a strong storm removes the soil around the tree roots.  Once the soil is washed away the tree dies and as the erosion continues.  Property values decrease with more erosion..

IS THERE A SOLUTION?

Humans have no control over Mother Nature. The best thing to do is use a locally sourced stone to control the “energy” of the storms. If you can control the energy, you can limit the damage done to the shoreline. Turbulence caused by storms has caused severe erosion for several years. Even with the high water temporarily subsiding, erosion continues.

The intensity of the current storms remains a constant threat to property values.

Shoreline erosion creates issues for all homeowners situated along the water. A recent report stated:

“with the high value of shoreline property, losing just one foot along a 100-foot lot means a potential loss of over $9,000 on a cost-per-square-foot basis”.

As property values continue to increase, those losses will grow proportionally.”

*Note: Damages to nearby buildings and structures were not included in the analysis.

Pier & Waterfront Solutions has a solution for the problem.  Let PWS install rip-rap to preserve your property value. 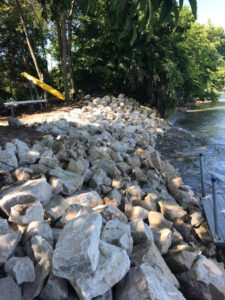 Rip-rap consists of large boulders and dimensional rock. The boulders are strategically placed along the shoreline to protect it from erosion.

The largest boulders form a “Toe Key” to hold the remaining stone in place. (See examples of these “toe keys” in our display yard.) They weigh thousands of pounds and are partially buried in soil to prevent movement.

Rip-rap absorbs the waves’ energy by channeling the energy into the gaps between the rocks. Once installed, the disruptive forces in the waves have less effect on the shoreline.  Wave energy dissipates when the water flows into the crevices. Erosion of the shoreline will stop, and your property remains intact.

Here’s an example of rip-rap in action!  You will see the water dissipating its energy into the gaps between the rocks at :50 Seconds into the video. Notice how the wave “disappears” into the rip rap openings.  The wave doesn’t reach the lawn.

How does Rip-Rap work?

The boulders absorb and deflect the impact of the waves before it reaches your property.

The rip-rap absorbs the waves’ energy when the gaps between the rip-rap trap the flow of water. The wave energy dissipates when the water flows into the gaps.
Here’s an example of rip-rap in action!  Notice how the water disappears.
An added benefit – Rip-rap helps protect your properties value by preventing damage to your landscaping. 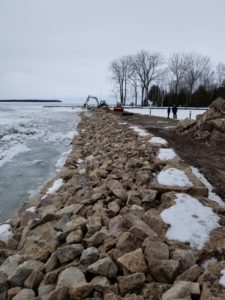 Don’t want to risk damaging your landscaping? Don’t worry! PWS can minimize lawn damage.  PWS is unique because we can use our barge and excavators to complete the work from the waterside. When finished, you barely know we were there. The work can also be done during the winter when the lawn is frozen to minimize any damage.

WHO TAKES CARE OF THE PERMITS, ETC.?

The PWS team is a turn-key operation. PWS handles all permit applications and follow-up work with the state.

For more information, see https://wisconsinpws.com/erosion-control/.  Hundreds have trusted PWS to do the job right!

Here are some examples of the work done by Pier & Waterfront Solutions.

Now is the time to ACT!

Why wait until it’s too late?

Protect your property! Use this simple link to get a quote.

(We are 1 mile North of County MM (Hwy 42) and 3 miles South of Sturgeon Bay at the Idlewild Road intersection.)

Got questions or need a quote?

Our Hours:
Mon–Fri:  8am – 4pm
Saturday: By appointment
Sunday: Closed